Anthony Fauci:
Leading the fight against infectious diseases for more than three decades

As the COVID-19 pandemic evolved in 2020, Dr. Anthony “Tony” Fauci became a familiar face and voice of reason as part of the White House Coronavirus Task Force. While Dr. Fauci was previously unknown to many Americans, he has been an integral part of public health and infectious disease responses for more than three decades.

Anthony Fauci was born in Brooklyn, New York in 1940 to first generation Italian American parents. His mother and father married shortly after high school, while both were in college. His father became a pharmacist and eventually owned his own drugstore. From a young age, Tony would help his father by delivering items from the drugstore throughout the neighborhood. While in high school and college, he was drawn to the problem-solving aspect of science, but also had an inherent interest in people — how they interacted, the history of people and civilizations, and the humanities. He decided to pursue a career in medicine as a way of joining these interests.

Fauci attended the College of the Holy Cross in Worcester, Massachusetts from 1958 to 1962, where he studied a hybrid of classics and science. After college, he attended Cornell Medical School. He wanted to be a practicing physician, seeing patients and teaching. While he did not set out with the goal of becoming a physician scientist—one who sees patients and does scientific research—that is what eventually happened.

Because the United States was involved in the Vietnam War when Fauci graduated from medical school, he, like all new (male) physicians, was required to serve the nation in one of the branches of the armed forces or in the Public Health Service (PHS) at the National Institutes of Health (NIH). By this time his interest in science and people had led Dr. Fauci toward the study of infectious diseases and immunology, so his first choice for placement was the PHS. He was accepted to a fellowship at the NIH to study immunology in the lab of Dr. Sheldon Wolff. Although Dr. Fauci had no experience in a scientific laboratory, his introduction to “bench work,” meaning lab-based research, was successful and ultimately led to a research position at the NIH.

From 1972 to 1981, Dr. Fauci’s lab at the NIH focused on regulation of the human immune system. Much of the work carried out in his lab was focused on diseases caused by the immune system, not on diseases caused by infectious agents, such as viruses or bacteria. Indeed, Dr. Fauci was the first to find what was essentially a cure for a rare immunological disease, called Wegener’s Granulocytosis. But, the course of his career changed in the early 1980s, when details began to emerge about young gay men becoming ill with diseases typically seen in immunosuppressed patients.

Based on his experience with diseases that affect the immune system, Fauci suspected that this new condition was being caused by a virus, and given that it was initially occurring only in gay men, he suspected it was sexually transmitted. As Dr. Fauci had a background in infectious diseases and experience with immunosuppressed patients, he decided to shift his research focus and started studying what ended up being acquired immune deficiency syndrome or AIDS, which was later discovered to be caused by human immunodeficiency virus (HIV). Dr. Fauci’s lab made significant contributions to the understanding of how AIDS destroys the immune system, leading to infections caused by microbes that do not typically cause disease. During this time, Dr. Fauci also became a public spokesperson about HIV and AIDS. His role as a spokesperson would only grow over time.

In 1984, Dr. Fauci became the director of the National Institute of Allergy and Infectious Diseases (NIAID). He agreed to take the position only if he could continue seeing patients and keep his research lab. No other NIAID director had ever maintained these roles while overseeing NIAID. As director, Dr. Fauci continued to rewrite the rules. During the late 1980’s, he invited HIV/AIDS activists to meet with him and discuss issues surrounding AIDS. These discussions were the beginning of communication between activists and the scientists studying their cause. Dr. Fauci continued to be a voice for HIV/AIDS and advocating for resources to advance the understanding, prevention and treatment of AIDS.

Dr. Fauci has been NIAID director during six presidencies, including Ronald Reagan, George H. W. Bush, Bill Clinton, George W. Bush, Barrack Obama and Donald Trump. He has testified before the U.S. Congress about every major public health crisis since 1984, including HIV/AIDS, Ebola, anthrax, and COVID-19. Even though his role as NIAID director is itself a full-time position, Dr. Fauci has continued to care for patients and oversee a large research program. In 2019, Dr. Fauci was the 41st most cited research scientist in history. The number of times his work has been cited by other researchers between 1980 and the start of 2019 ranked him 8th on the list of most cited scientists in the field of immunology. He has received numerous awards, including the Presidential Medal of Freedom, and has been the recipient of more than 45 honorary doctoral degrees. He describes himself as a workaholic, working about 16 to 17 hours per day and on weekends (AAI, 2015).

Dr. Fauci has been married for more than 30 years. His wife has a doctorate in nursing and works at the NIH. They have three grown daughters. In his “free time,” he runs and enjoys going out to dinner with his wife, who he describes as his best friend (AAI, 2015).

Watch these video clips from an interview with Dr. Fauci during the making of HILLEMAN – A Perilous Quest to Save the World’s Children: 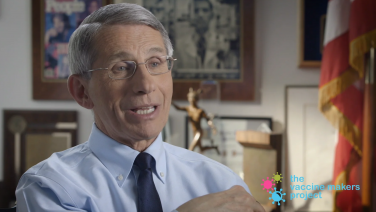 What do vaccines do?

Dr. Fauci describes how a vaccine works
Watch the video. 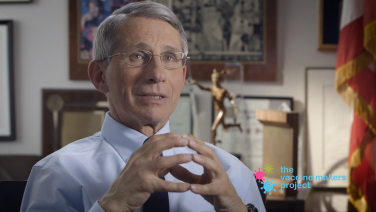 What I learned from the HIV pandemic

Dr. Fauci discusses what he learned during the HIV pandemic
Watch the video. 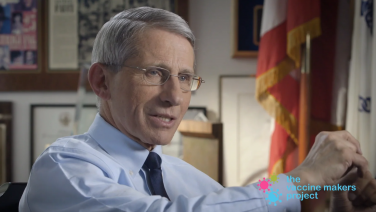 What I learned from vaccinologist, Maurice Hilleman 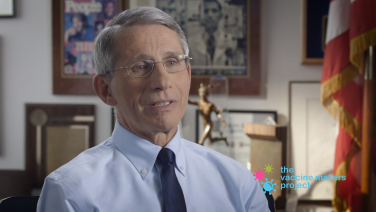 Maurice Hilleman's impact on the field of vaccines 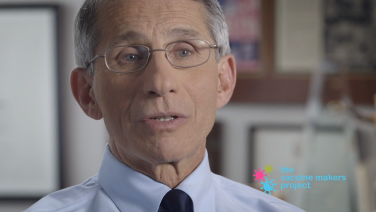 Maurice Hilleman and our lifespan today

Dr. Fauci describes the impact Maurice Hilleman has had upon our life expectancy
Watch the video.