Stanley Plotkin:
Pioneering the use of fetal cells to make rubella vaccine

Stanley Plotkin: Pioneering the use of fetal cells to make rubella vaccine

“From my . . . personal point of view, having seen the suffering of families with Congenital Rubella Syndrome infants, I consider that what was done is 100% moral.”

These are the words of Dr. Stanley Plotkin, a pediatrician and vaccinologist, whose research contributed to the development of multiple vaccines, including those for rubella, rabies, rotavirus, polio, and varicella. He also worked on cytomegalovirus and HIV vaccine development. Both of which have proven elusive and remain unsolved.

Yet, many who have heard of Dr. Plotkin focus on a decision he made when creating the rubella vaccine, which is the “R” in today’s MMR vaccine. Because viruses need another cell’s machinery to reproduce, making a viral vaccine means using a cell line that has certain characteristics. First, it must be a type of cell in which the virus grows well. Second, it must be a cell line that is free of other, unwanted viruses. And third, it must be a cell line that can be used virtually indefinitely. If the company has to change the cell type that the vaccine virus is grown in, the vaccine would need to be further tested and approved before it could be used.

Dr. Plotkin’s controversial decision centered on the cell line he chose to grow the rubella virus for his vaccine – human fetal embryo fibroblast cells. The cells were originally obtained from an elective termination of a pregnancy in the early 1960s. Fibroblast cells help keep connective tissues, like skin, together. Like every other cell in the body, except for sperm and eggs, these cells are diploid cells, meaning they have two sets of chromosomes. Dr. Plotkin, who often refers to the cells as “human diploid cells,” chose these cells for a couple of reasons. First, they met the necessary criteria that the virus grew well in them. Rubella virus is, unfortunately, quite capable of growing in fetal cells. When the virus infected women early in their pregnancy, babies would often be born blind, deaf, autistic, mentally disabled, or with heart defects.

Another reason he chose to use fetal cells was because, at the time he was doing his research in the 1960s, it had been discovered that some cell lines from animals contained viruses of which scientists were previously unaware. Scientists were trying to figure out whether these extra viruses caused harm. Luckily, they didn’t, but that was not known at the time. Dr. Plotkin’s approach circumvented this concern because fetuses are in the sterile environment of the womb. So, their cells would not contain other viruses.

Because of a process called “cell passage,” the cell line could also be used virtually indefinitely to make the vaccine – taking care of the third requirement for a vaccine-associated cell line.

So, how does cell passage work?

When cells replicate in a laboratory setting, they are limited by the amount of nutrients and size of the container in which they are grown. When they reach this point, referred to as confluence, they die unless they are given fresh ingredients and more space. Right before this happens, scientists put one-fifth of the existing cells into five new containers. This is called “seeding.” Over the next few days, the cells in each of those five containers will again use the nutrients and grow until they cover the entire bottom of the flask. At this point, the scientist can again do a one-fifth seeding from each of the five containers; they will now have 25 new containers. In this way, scientists can make an infinite number of cells.

Each time the cells are “split” into new containers, they are considered to be one “passage” older. So, in our example, the first “split” into five containers would be passage 1, and the next split, into 25 containers, would be passage 2. Scientists keep track of this passage number because when cells are passaged too many times, they no longer grow as well. For human cells, including the fetal fibroblast cells Dr. Plotkin used, this number is about 50 passages. This is called the Hayflick Limit, and it is named after Dr. Plotkin’s colleague at Wistar who figured this out. In fact, Dr. Plotkin got his cells from Leonard Hayflick and his colleague, Paul Moorhead, were studying cellular aging in the lab across the hall. They were using fetal cells because to figure out the limits of cell reproduction, they needed to start with cells that were not too old.

So, now you might be wondering, if cells can only reach 50 passages, how do we still have cells to make vaccines almost 50 years later?

When scientists are passaging the cells, instead of continuing to make more and more containers, they freeze some. For example, instead of making 25 containers in passage 2, the scientist may decide to make five new containers and freeze the cells that would have gone into the other 20 containers. The remaining cells are placed into vials for the freezer. When the cells are frozen, they are stored at about -200 degrees C in liquid nitrogen. At this temperature, biological activity stops. But, when the cells are thawed and placed in new containers with nutrients, they again start to grow.

Depending upon the cell type and container size they are using, the quantity of cells in this example could produce eight to twenty vials of cells to freeze. These passage 2 cells can be thawed, typically one or two vials at a time, to start the cell growth process again anytime the currently growing cells get too old. Likewise, in a few days the five new flasks will grow to confluence, and the same process can be followed, creating more vials to freeze. The important point to understand though is that cells grow exponentially, so scientists can grow large quantities of cells to use immediately or to store for future use. In the case of the fetal cells, this process was used to ensure a virtually endless supply. In her book, The Vaccine Race: Science, Politics, and the Human Costs of Defeating Disease, Meredith Wadman (2017) described Leonard Hayflick’s calculations of the potential cell production,

… if you then kept splitting the bottles in this way when the cells reached confluence, until the original cell population had doubled fifty times—roughly the Hayflick limit—you would produce, he calculated, 1022 cells, or 10 sextillion cells. Knowing as he did that 14.2 billion wet cells weigh about an ounce, Hayflick also calculated that the cells in that one original bottle would therefore produce twenty-two million tons of cells. (p.89)

Scrutiny from all sides

Initially, Dr. Plotkin faced scrutiny from his colleagues for this novel approach to getting around unwanted viruses in the vaccine. But, over time, as experience showed the approach was safe, scientists and government officials accepted that his was a useful approach. Eventually, the chickenpox, shingles, hepatitis A, and one of the rabies vaccines were also made using this or a second fetal cell line, also isolated in the 1960s.

It took longer for religious leaders to determine that they, too, accepted the use of fetal cells to make vaccines. Eventually, all of the major religions made statements in support of their use, arguing that administering vaccines grown in these cells was less “sinful” than allowing the diseases to cause disability and death by not using the vaccines.

Unfortunately, today, the debate rages on as some people continue to question the use of these cells, despite the scientific and religious positions.

Dr. Plotkin had watched parents struggle with the notion that their unborn child might have disabilities that would shape their entire lives. This left him to believe that the decision, ultimately, was the right one.

In 1963 to 1964, before the vaccine was available, rubella swept through the U.S. infecting about 12.5 million people and causing about 20,000 fetuses to be infected, called Congenital Rubella Syndrome. The vaccine was licensed in 1969. By 2005, rubella was eliminated from the U.S.

Additional video clips of Dr. Plotkin Source: Interview during the making of HILLEMAN – A Perilous Quest to Save the World’s Children 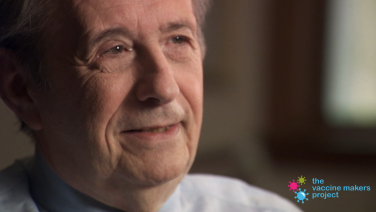 The Role of Vaccination

Dr. Plotkin discusses the impact of vaccines on public health.
Watch the video. 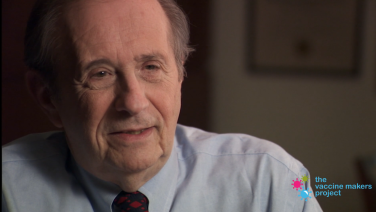 The Future of Immunization

Dr. Plotkin shares his thoughts on the future of vaccines.
Watch the video. 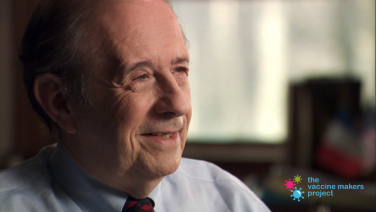 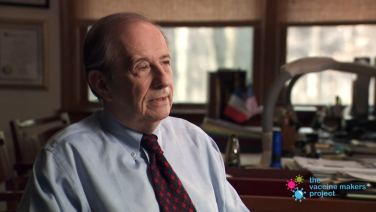 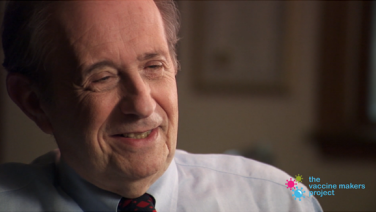 The Characteristics of Scientists

Dr. Plotkin describes the characteristics he thinks are important when studying science.
Watch the video.